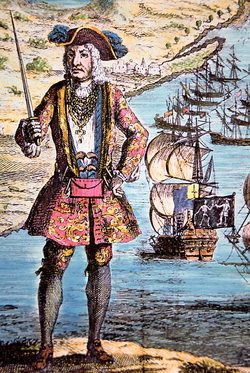 Bartholomew Roberts was, by count of ships captured, the singular most successful pirate in the Golden Age of Piracy. Over the course of just four years, he captured over 470 vessels, and struck fear into the hearts of merchant and military sailors alike. Today, he is sometimes referred to as “Black Bart,” though this nickname was never used in his own time.

Roberts initially served as third mate aboard the slave ship Princess, but in 1719 it was captured by the pirate Howell Davis, and the pirates forced Roberts to join their crew. While reluctant to participate in crime, he quickly proved his skill as a navigator aboard their flagship, the Royal Rover. Davis, recognizing Roberts’ competence and strong convictions, befriended him and made him his confidant.

When Davis was killed in an ambush at Principe, the crew was so impressed with Roberts that they elected him as their new captain – even though he had only been aboard for six weeks. Roberts was still opposed to even being aboard the ship, but his outspokenness about this only caused the pirates to hold him in higher esteem. Roberts chose to accept the captaincy, stating that if he must be involved in piracy, it was “better to be a commander than a common man.”

Roberts was known for being unusually pious and as something of a dandy. He dressed in fine clothes, even in battle: a crimson coat, breeches, and a plumed hat. He held religious services aboard his vessel and avoided attacking ships on the Sabbath, and provided musicians who were also given that day off. His pirate code banned gambling aboard his ships, and he discouraged drunkenness, preferring tea to alcohol himself. Despite his odd preferences, his men were extremely loyal, as he proved himself time and again in battle. 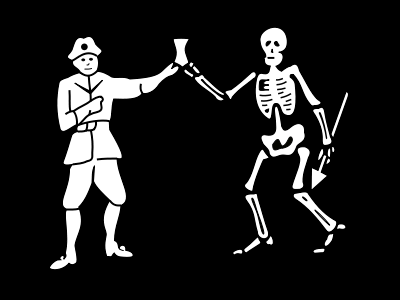 After assuming command, Roberts first sailed south to the coast of Brazil, where he found a fleet of 42 Portuguese treasure ships awaiting their military escort. Sneaking over to one ship, he boarded and forced the captain to reveal the richest ship in the fleet. He then captured it, seizing thousands of gold coins, jewelry, and a diamond-encrusted gold cross meant for the King of Portugal. Roberts wore this cross on a gold chain around his neck every day thereafter until his death.

While chasing a potential target aboard a captured sloop, Roberts left a pirate named Walter Kennedy in command of the Royal Rover. Kennedy took the opportunity to make off with his ship and most of the crew to begin a career as an independent pirate. Roberts named his sloop the Royal Fortune, a name he would use for all four of his flagships after. Because Kennedy was Irish, Roberts mistrusted Irishmen from then on, and never allowed any to join his crew.

After leaving the waters of Brazil, Roberts headed north to Newfoundland, where he captured 22 ships in harbor without firing a shot. The terrified captains all surrendered immediately when he arrived. Roberts, hating the cowardice, burned all the ships after looting them of their valuables. He then headed for the Caribbean, where he wrought havoc upon French and English shipping in the West Indies. Trade in the region was brought to a complete standstill, with even the military afraid to challenge him. 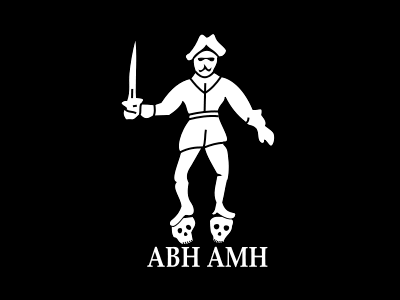 Bartholomew Roberts’ second pirate flag. The letters stand for “A Barbadian’s Head” and “A Martiniquan’s Head.”

Roberts developed a grudge against the islands of Barbados and Martinique. When he first entered the Caribbean, the two islands sent pirate hunters after him, and twenty of his men were killed in the clash before he was forced to flee. He changed his pirate flag to depict himself standing upon the skulls of a Barbadian and a Martiniquan. Eventually, he caught a French man-o-war carrying the governor of Martinique, whom he promptly hanged from the yardarm. After this act, the French and English navies made more efforts to hunt him down. With trade in the area halted and the risk of battle with the navy, Roberts sailed east to the coast of Africa.

While Robert’s crew was drinking ashore one day at Cape Lopez, they sighted an approaching ship. They thought at first that it was a merchant, but as it drew closer, one pirate recognized it as the HMS Swallow, a Royal Navy vessel sent to capture them. Roberts chose to run. He sailed Royale Fortune straight past the Swallow, taking one broadside but forcing the enemy to turn around. But his navigator made an error, allowing the Swallow to fire on them a second time. Roberts was struck in the throat by grapeshot and instantly killed. His crew threw his body overboard, then turned and fought for several hours to avenge him before being captured.

The death of Bartholomew Roberts was a major turning point in the authorities’ battle against piracy. News of his death shocked pirates and naval officers alike, as it brought a sudden halt to his seemingly-unstoppable whirlwind of success. Afterwards, piracy as a whole began to slowly die off. Today, the end of Robert’s reign of terror is generally seen as the end of the Golden Age of Piracy.

As the most successful of the Caribbean pirates, Bartholomew Roberts has appeared in many media adaptations of pirates. The “Dread Pirate Roberts” from the book and film The Princess Bride was based on him – besides the name, the character Westley, who uses the alias, is a refined individual who is captured by pirates and befriends the captain, ultimately taking his place. He appeared as a character in the game Assassin’s Creed IV: Black Flag, in which he is a mythical figure as well as a pirate. He also appeared in Sid Meier’s Pirates! as a rival to the player, complete with his red coat and diamond cross in battle. Additionally, he has been mentioned in passing in numerous tales, such as in Treasure Island.