Stede Bonnet was one of the more unusual pirates. Originally a wealthy landowner from Barbados, he was termed the “Gentleman Pirate” due to his well-to-do background and educated upbringing.

Bonnet was born and raised near Bridgetown, Barbados, where he lived on a large estate that he inherited from his father. He married and had three children, and was an honorary major in the local militia. Seemingly out of nowhere, in 1717 he purchased a six-gun sloop, named it the Revenge, and sailed away to begin a new life as a pirate. His acquaintances were shocked and unable to explain his decision, but suspected he may have done it to escape his nagging wife.

Bonnet had an unconventional approach to piracy. Purchasing his ship was the first oddity – most pirates simply stole one, committed mutiny against their captain, or were legal privateers who chose to attack ships from any nation. Bonnet also ignored the common practice of dividing shares of plunder among the crew – instead, he used his wealth to pay his crew regular wages. Additionally, Bonnet lacked sailing experience entirely. He relied on his quartermaster and sailing master to manage the ship and crew.

Despite his inexperience, Bonnet saw early success. He sailed the coast of Virginia and plundered several vessels near the Chesapeake Bay. When he encountered ships from Barbados, he burned them, in hopes of preventing news of his crimes from reaching home. Eventually, he sailed for the pirate haven of Nassau, but along the way had a disastrous encounter with a Spanish man-o-war. A fight ensued, and by the time the Revenge managed to escape, the ship was heavily damage, and half of the crew were killed. Bonnet himself was badly wounded.

At Nassau, Bonnet met and befriended the infamous pirate Blackbeard. Due to his wounds, he agreed to temporarily place the Revenge under Blackbeard’s command. When Blackbeard became aware of Bonnet’s inexperience, he insisted that Bonnet stay aboard the Queen Anne’s Revenge as a guest, while appointing one of his own men to captain Bonnet’s sloop. It took some time for Bonnet to realized he had effectively been betrayed and deposed. Nevertheless, he remained in good spirits and enjoyed walking the decks of Blackbeard’s ship. 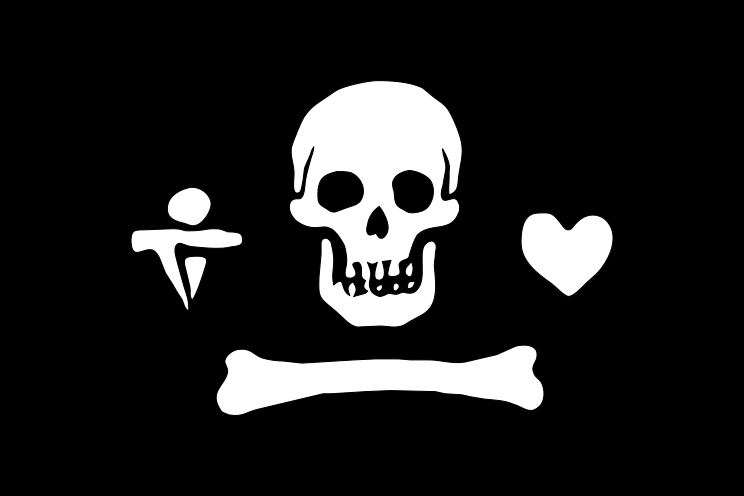 Eventually, the two pirates decided to take advantage of a pirate amnesty from the British, and traveled to Bath Town, North Carolina where they received a pardon from governor Charles Eden. Bonnet remained awhile to obtain official clearance to sail the Revenge to St. Thomas, where he planned to purchase a letter of marque from the Danish colonial government and go privateering against the Spanish. Meanwhile, Blackbeard headed back to Topsail Inlet, where they had anchored his fleet. When Bonnet returned, he found that Blackbeard had betrayed him. The pirate had looted the fleet of their valuables and supplies, marooned some of the crew, and beached most of the ships – a scheme to keep most of the plunder for himself. Bonnet pursued Blackbeard and rescued the men he marooned, but was unable to find the pirate.

Bonnet attempted to stick to his plan of becoming a privateer, but the hurricane season prevented him from reaching St. Thomas. His newfound poverty and lack of supplies from Blackbeard’s theft left him and the crew desperate, and he soon returned to piracy. In an attempt to disguise his crimes and avoid jeopardizing his pardon, he renamed his ship the Royal James and used the alias “Captain Thomas,” but eventually dropped the act. He had apparently learned from his time under Blackbeard, and was now engaging in common practices, such as paying shares of plunder instead of wages. He also kept several captured vessels, and sailed in a fleet of three sloops, among which he spread his crew.

In August 1718, Bonnet sailed up the Cape Fear River in North Carolina, where he careened the Royal James and remained for 45 days to wait out the hurricane season. When word of his presence reach Charleston, the governor of South Carolina sent two heavily-armed sloops after him under the command of Colonel William Rhett. When the pirates recognized the danger, they attempted to flee in the Royal James, choosing to fight past the ships in the morning rather than risk running aground in the narrow river mouth if they snuck away at night. The battle lasted several hours, and saw all three ships run aground. The tide eventually freed Rhett’s ships, which closed in and boarded Bonnet’s sloop. Bonnet and his pirates were arrested and brought back to Charleston.

At Bonnet’s trial, the judge cited his privileged upbringing and liberal education as factors that should have stopped him from choosing a life of crime. He was sentenced to death, and begged for clemency, even offering to cut off all his limbs as assurance he would not return to piracy. While he awaited execution, his letters and fearful state of mind moved many in the city to pity, especially the women. After several delays of his execution, he was eventually hanged on December 10, 1718, and left on the gallows for several days as a warning for other pirates.

Stede Bonnet was a major character in the book On Stranger Tides, in which Blackbeard manipulates him into entering piracy. He has minor roles in several other books, and has appeared in video games as well. In Assassin’s Creed IV: Black Flag, he is a major character who repeatedly interacts with the protagonist. He also appeared in Sid Meier’s Pirates! as one of the nine famous pirates competing against the player.