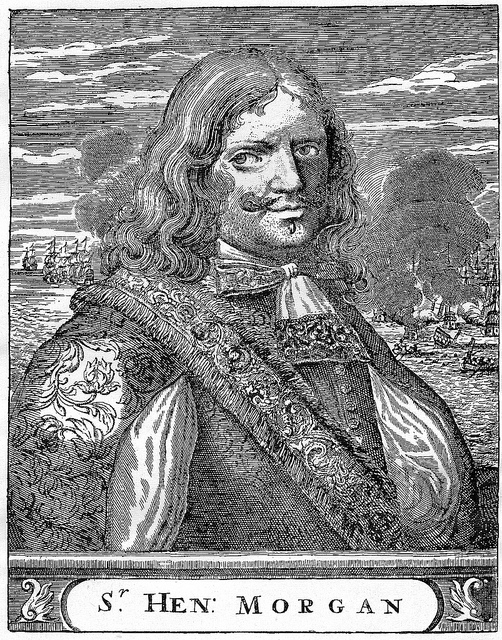 Henry Morgan was an English privateer who fought against Spain from Jamaica. The namesake of Captain Morgan Rum, he was arguably the greatest pirate who ever lived. He became immensely wealthy from his exploits and retired to a peaceful life ashore in Port Royal.

Morgan’s early life is obscure, but it is known that he was born to a wealthy Welsh family in 1635. At some point he made his way to the Caribbean, and was likely involved in the British fleet’s capture of Jamaica from Spain in 1655. By the mid-1660s, he was an established privateer who helped capture several islands off Colombia, and raided cities along the Mexican coastline. In 1663, he was involved in the sack of Campeche, an attack so successful and complete in its destruction that the King of England banned similar raids because of the political fallout.

To enforce this ban, the governor of Jamaica was recalled and replaced by Thomas Modyford. But Modyford chose to ignore orders to recall the pirates, seeing them as necessary to the defense of Jamaica. He repeatedly called on Henry Morgan and other privateers to raid more Spanish targets, while serving as a buffer between them and the crown’s attempts to stop such attacks. Whenever the pressure to recall the pirates increased, he would have them attack again, intent provoking Spanish military responses to justify his need to protect the island. 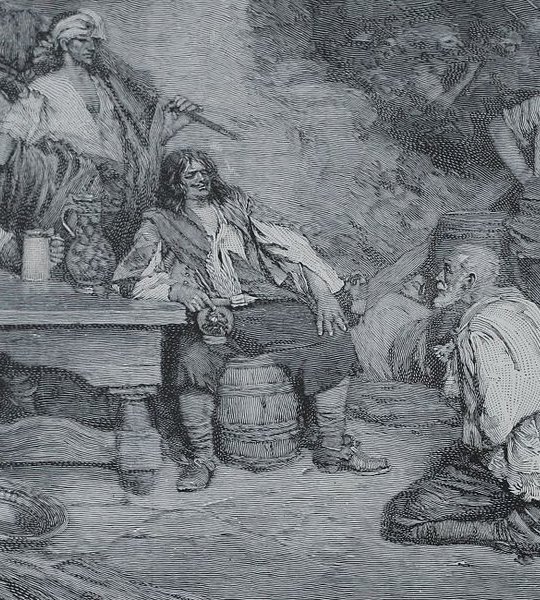 Morgan spent the late 1660s raiding Spanish ships and towns across the Caribbean. While based in Port Royale, he visited numerous ports such as Tortuga to raise his crew to hundreds of men. Morgan was known to dress in fancy clothes and wear jewels when recruiting, to entice pirates to join him under expectations of obtaining similar riches. On one expedition, Morgan landed in Cuba and sacked the inland city of Puerto Principe, then sailed south to Panama where he captured Puerto Bello. His men stayed in Puerto Bello for two months robbing everything they could find, eventually seizing a total of over ten thousand pieces of eight.

In 1670, Morgan set out to attack Maracaibo at the suggestion of a French captain in his fleet, who had raided the town under François l’Olonnais three years earlier. Maracaibo guarded the narrow entrance to Lake Maracaibo, but was undefended on the landward side. When the pirates arrived, however, they found that a new fort had been constructed at the narrowest part of the channel. The Spaniards opened fire on the pirates, forcing them to land their ships and march on the fort at night. By the time they reached, they found it abandoned – the soldiers had gone to warn Maracaibo of the attack.. The Spanish soldiers left an explosive trap in the fort, but Morgan managed to disarm the lit fuse in time. The pirates used swift canoes in an attempt to reach the town, but were still too late to prevent residents from escaping with their valuables.

Morgan then sailed to the southern end of the bay and sacked the city of Gibraltar. After taking its wealth, he went back north to exit through the narrow inlet, but found the Spanish had been reinforcing the forts in the area while he was sacking towns. Additionally, they had brought three warships to challenge the pirates. Through a combination of trickery and luck, he managed to defeat the ships, destroying one with an explosive-laden vessel before attacking the other two. He then slipped past the fort under the cover of darkness using the movement of the tides, and returned to Port Royal.

Morgan’s final expedition was a raid on Panama City in 1671, on the Pacific coast of Panama. After seizing the city, he burnt it to the ground. The city was rebuilt in a different location, and the ruins of the original town remain to this day. Unknown to Morgan, a peace treaty was signed in the summer of 1670 between England and Spain, recognizing English rule in Jamaica and banning privateering attacks against the Spaniards. Morgan’s attack on Panama violated this treaty, so he was arrested and sent to London for trial. He was able to prove that he had no knowledge of the treaty, securing his acquittal. When relations with Spain deteriorated once more, he was knighted, becoming Sir Henry Morgan.

As a reward for his efforts, Morgan was made lieutenant governor of Jamaica. He returned to Port Royal, but quickly proved unsuited to life in government. He often neglected official duties in favor of drinking with his pirate companions, and his rowdy behavior drew complaints from locals. In 1683, he was removed from his official position. He continued to live in Port Royal on his plantation, secure in his vast wealth. Five years later, he died in his bed from dropsy, a condition caused by too much food and drink.

Henry Morgan’s immense success has led to common appearances in modern fiction and culture. Most famously, he is the namesake of Captain Morgan rum, and his likeness appears on its bottles. He has been featured in numerous books, perhaps most notably in Captain Blood, a fictional novel based heavily on his life. He appeared in Sid Meier’s Pirates as one of the nine historical pirates that rival the player, and realistically, carries a much larger sum of gold than the others. Along with l’Olonnais, he is one of the few pirates in the game who was actually active in its time period. Oddly, in this game he sails the Queen Anne’s Revenge, a ship which actually belonged to Blackbeard. Morgan also is the namesake of the album and titular song Captain Morgan’s Revenge, by the pirate-metal band Alestorm.