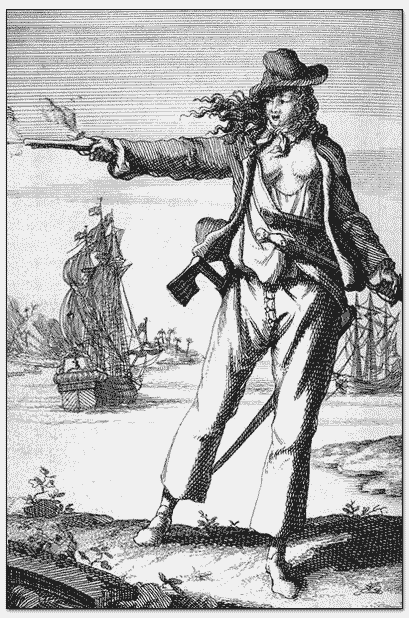 Anne Bonny was one of the most famous female pirates. She sailed as part of Calico Jack Rackham’s crew together with Mary Read, and was known for her quick temper and ferocious combat skills.

Bonny was born in Cook County, Ireland, as the illegitimate daughter of a lawyer named William Cormac and his servant, Mary Brennan. When the affair was discovered by his wife, Cormac took Anne and Brennan and traveled to Charleston, South Carolina, to avoid the resulting scandal. There, he became the wealthy owner of a plantation.

Anne was known for her fiery temper, reportedly stabbing a servant girl with a kitchen knife at age 13. She quickly grew bored of life on the plantation, and married James Bonny, a sailor and sometimes-pirate who hoped to inherit the plantation. In response, Cormac disowned her, and the pair left Charleston, but not before Anne set fire to the plantation.

Sometime between 1714 and 1718, Anne and James Bonny moved to Nassau in the Bahamas, known at the time for being a pirate haven. In 1718, Woodes Rogers arrived to become the new governor, and was intent on cleaning up the town. He enlisted James as an informant against the other pirates living there. This disgusted Anne, who ended up beginning an affair with the pirate Jack Rackham, better known as Calico Jack, who was living in the city after accepting a royal pardon. Rackham offered to purchase Anne away from James, but he sought aid from the governor, who decided to have Anne publicly flogged for her adultery and insisted she be returned to her husband.

Rather than submitting to Governor Rogers’ judgment, Anne and Calico Jack decided to flee. They recruited a pirate crew, then escaped aboard a stolen sloop, which Rackham named the Revenge. Bonny disguised herself as a man so as not to alarm the crew, who would have protested to sailing on a ship with a woman aboard. When Bonny was later discovered, she had already proven her worth as a pirate, so they accepted the presence of Rackham’s lover among their crew.

Eventually, Bonny discovered that another of the sailors on the Revenge was also a woman disguising herself as a man. This turned out to be Mary Read. Rackham allowed Read to stay aboard the ship, as she had already proven herself a skilled pirate. Read and Bonny became fast friends, and led the rest of the crew in combat. They became respected for fighting more fiercely than the men, and were feared by government officials and pirate hunters for their violence and skill.

In October 1720, Rackham’s ship was boarded by an English pirate hunter near Jamaica. While all the men were drunk below decks and unable to assist, Bonny and Read fought hard to defend the vessel, surprising the enemy crew with the ferocity. They were eventually overwhelmed, and the pirates were all captured and brought back to Port Royal, where they were tried and convicted of piracy, and sentenced to be hanged the next day. Bonny’s last words to her lover were reportedly, “Had you fought like a man, you need not have been hanged like a dog.”

Anne Bonny and Mary Read both obtained a stay of execution because they were pregnant, known as “pleading the belly.” Read died soon after due to a fever, but it is not known what happened to Bonny – all traces of her disappear after this. It is thought that either her father heard of her arrest and arranged a pardon, or that she returned to James Bonny in Nassau. She may have also managed to somehow escape and return to piracy under an new name.

As the most famous female pirate, Bonny has made several appearances in entertainment and media. She appeared in the television series Black Sails, written as a prequel to the book Treasure Island. She also appeared as a character in the video game Assassin’s Creed IV: Black Flag.