Mary Read spent most of her life disguised as a man, and became one of the most famous two female pirates. She was born in London as the illegitimate daughter of a widowed mother. When her older, legitimate brother died, her mother began to dress her as a boy and pass her off as her son, so that they could continue receiving financial support from her brother’s grandparents. She used her male disguise to find work usually given to boys – first as a footboy and later on a ship.

Read, still maintaining her life as a man, eventually joined a land-based British military unit in Flanders, where she distinguished herself for her bravery. There, she fell in love with a Flemish soldier, and the two married after she revealed her gender to him. They opened an inn in Holland called the Three Horseshoes. But when her husband fell ill and died, she returned to living as a man. She attempted to return to military service, but peacetime limited her opportunities, so she obtained passage to the Caribbean on a ship bound for the West Indies.

Upon reaching the Caribbean, Mary’s ship encountered the Revenge, a pirate sloop under the command of Calico Jack Rackham. Rackham seized the vessel, and Mary signed on with the pirate crew. She would remain with this ship for the remainder of her life.

While aboard the Revenge, Read struck up a friendship with the captain’s lover, Anne Bonny. Bonny was also disguised as a man, and revealed her gender to Read after taking an interest in her, thinking that Read was actually a man. Read revealed her own status as a woman to Bonny in response, and thereafter they became close friends. When Rackham grew jealous, thinking Anne was involved with another man, she told him that Mary was a woman as well. Because Mary had proved herself skilled as a pirate, and because he already had another woman aboard in the form of Anne, he allowed Read to stay on with the crew.

Read and Bonny led the crew in battles, and were often found at the front of the boarding parties. They fought as valiantly as the men, and earned a fearsome reputation for their skill as pirates and their ferocious performance in battle. When they were each in turn discovered to be women, the crew accepted them out of respect for their abilities. 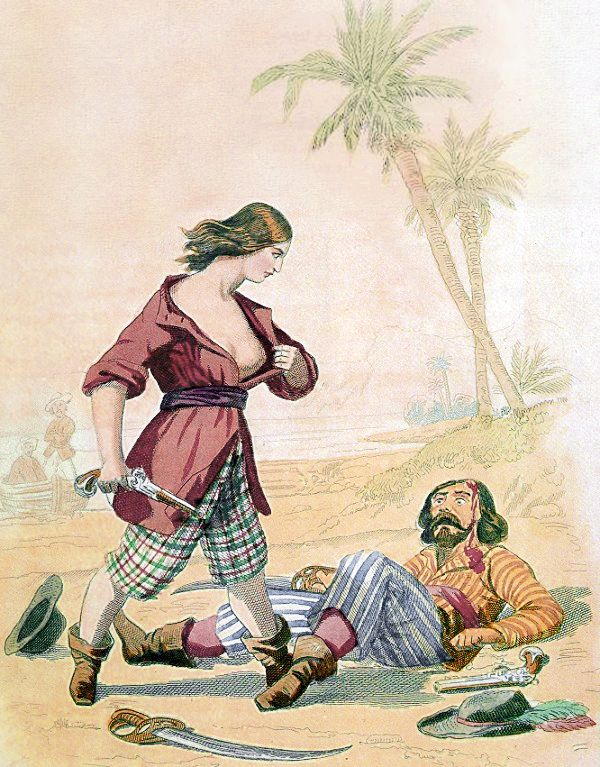 At one point, Read fell in love with a new member of the crew. But this crewman got into a quarrel with a more experienced pirate, and they decided to settle it with a duel. Knowing her lover would not stand a chance, Mary also quarreled with this pirate, and insisted on dueling immediately. They engaged in an extended battle on shore, but the pirate was slowly winning – until she used a pause in the combat to rip open her shirt and expose her breast. The other pirate was shocked, as he had not known he was fighting a woman. Read took advantage of his hesitation to strike his neck and nearly severed his head, saving her lover from death at the pirate’s hands. They married shortly after, but it was to be short-lived.

In October 1720, a pirate hunter found the Revenge near Jamaica and boarded it late one night. Most of the crew were drunk below decks and could not put up much of a defense. Mary and Anne fought hard against the boarders, but they were eventually defeated. The pirates were taken captive and brought to Port Royale, where they were tried and convicted for piracy. The men were all hanged the next morning, but Read and Bonny both avoided execution by “pleading their bellies” – meaning they asked for a stay of execution due to being pregnant. It is not known what eventually became of Anne Bonny, but Mary Read soon died in prison from a fever.