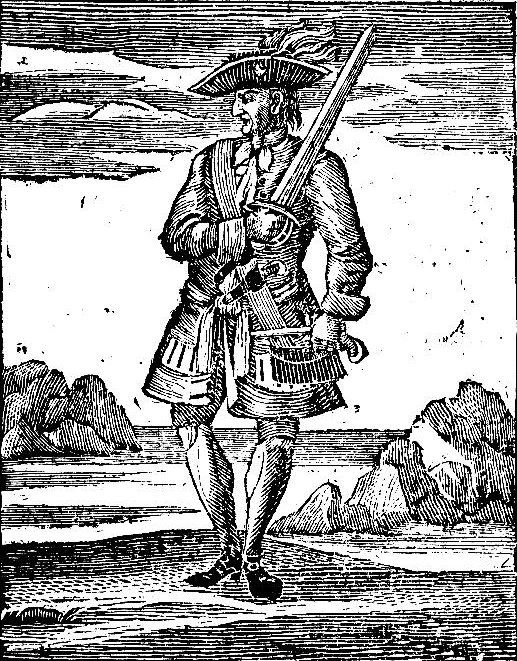 Jack Rackham, best known by his nickname, “Calico Jack,” began his career as quartermaster for Charles Vane. He operated independently from 1718 to 1720 with moderate success. Today, his is most remembered not for his exploits, but for having the famous female pirate duo, Anne Bonny and Mary Read, as part of his crew, and for having the most recognizable pirate flag.

Rackham’s full name was John Rackham, but he was usually referred to as Jack. The nickname “Calico Jack” came from his brightly-colored clothing, which was made from calico cloth. This gave him a striking appearance, and was unusual at a time when silk and velvet was more common.

Rackham became captain in late 1718, when Charles Vane’s sloop encountered a much larger French man-o-war. Vane decided to flee from the enemy ship, feeling that it was more prudent and cautious to avoid battle with such a foe. His crew disagreed, seeing it as cowardice, and Calico Jack led a vote to end Vane’s captaincy. Rackham was made captain, while Vane and his handful of supporters were given supplies and sent away in their extra sloop. 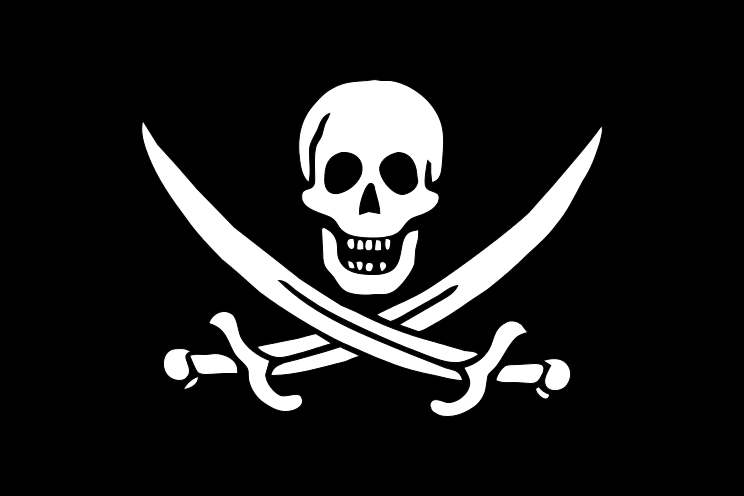 Rackham’s version of the Jolly Roger is the most well-known today. Instead of the traditional skull-and-crossbones design, his featured a set of crossed swords under the skull, where the bones would usually be. The design became very popular, and replications or variants of it feature widely in modern usage – for instance, it was flown by the Black Pearl in the Pirates of the Caribbean film series.

Rackham usually preyed on small ships close to shore, such as fishing vessels and lightly-armed merchants. He would occasionally take larger prizes – the riches of these was a merchant ship named Kingston. Unfortunately, he took this ship within sight of Port Royal, and the residents there sent pirate hunters after him. They eventually caught up with him and retook the vessel while his men hid ashore.

In 1719, Rackham sailed to Nassau, where he and his crew received a royal pardon from the governor, Woodes Rogers. While ashore, he began an affair with Anne Bonny, the wife of pirate-turned-informant James Bonny. When the affair became public, Rackham attempted to buy her away from her husband, who instead asked Governor Rogers to intercede. When Rogers threatened to have Anne whipped for her adultery, Rackham and his lover plotted an escape. They gathered a crew, and stole a sloop, which they named Revenge. Because the crew was unlikely to agree to sail with a woman aboard the ship, she wore men’s clothing to disguise herself.

At some point, Anne discovered that one of their crew was Mary Read, another woman who also disguised herself as a man to engage in piracy. Together, the two served as Rackham’s lieutenants. They distinguished themselves for fighting more fiercely than any of the men in the crew.

Rackham met his doom in October 1720, when an English pirate hunter caught up to the Revenge when it was anchored near Jamaica. When they boarded the pirate sloop, they found that most of the crew were too drunk to put up a fight. Bonny and Read defended the ship alone, but were eventually overwhelmed. Rackham and his crew were all captured and taken to Port Royal, where they were found guilty of piracy. The women were found to be pregnant and spared execution, but the rest were all hanged the next day, and their bodies were gibbeted outside the harbor as a warning to other pirates. Before Rackham’s death, Anne Bonny reportedly told him, “Had you fought like a man, you need not have been hanged like a dog.”

Calico Jack’s main portrayals in media have been in video games. His most recent appearance was in Assassin’s Creed IV: Black Flag. He is also one of the nine infamous pirates the player can defeat in Sid Meier’s Pirates!, and appears as a named pirate on wanted lists (as John Rackham) in Port Royale. His pirate flag is more widespread, appearing in most pirate-themed movies and games, even if he is not mentioned.